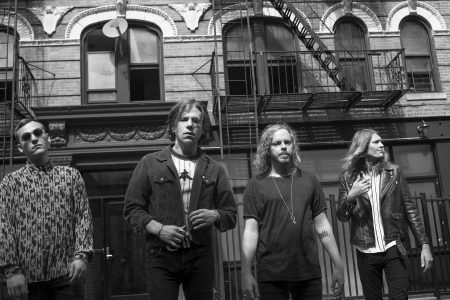 “With this record, we wanted to be more transparent,” says Matt Shultz, lead singer of Cage the Elephant. “We wanted to capture the sentiment of each song, and whatever emotional response it provoked, to be really honest to that.”

With their fourth album, Tell Me I’m Pretty, Cage the Elephant are pushing the advances they made with their last record—2013’s Melophobia, which was nominated for a Grammy for Best Alternative Album—while also drawing from the sounds that initially inspired them to start making music back in their hometown of Bowling Green, Kentucky. The results are the band’s most forceful and focused songs yet, a set of concise, punchy garage-pop with a feel that guitarist Brad Shultz describes as “a psychedelic John Wayne at an Iggy Pop show.”

Long celebrated as one of the most explosive live bands in the world, Melophobia took the band to new heights, spinning off two Number One singles on the Alternative charts, “Come a Little Closer” and “Cigarette Daydreams.” The group felt a new liberation during the course of making that record, a confidence that carried over into the sessions for Pretty.

“The last record was such a big breakthrough for us that it spilled over into this one, and allowed us to work freely from the very start,” says Brad. “Usually I feel so empty after each record—like we’ve poured everything out and there’s nothing left in the tank. But I was so inspired that I just continued to write, and it was really natural and enjoyable.”

Matt claims that some of the album’s direction can be traced to a blistering performance he gave at Bonnaroo in 2013, singing “Break On Through (to the Other Side)” at the late-night SuperJam backed by an all-star band including Robbie Krieger of the Doors. “It was a massive affirmative,” he says. “Rock and roll has become somewhat of an uncool thing to talk about in the mainstream world, almost as if it’s a dirty word. With that performance, I could clearly see that it to be a hole that’s missing in music today—that classic sound and energy that people are dying for. We definitely wanted to pay homage to that, to the bands we discovered rock and roll through, the music we cut our teeth on.”

“When me and Matt started writing,” says Brad, “it was because of our father, who was a songwriter. We listened to Tommy James and the Shondells, the Beatles, Chuck Berry, the Stones. That’s what came natural to us. We were maybe fighting that on our previous records, but this time, the approach for me was that it’s sometimes better to take a step back to move forward.”

Even the lyrics came to Matt with a new sense of purpose and clarity. Two of the first songs he wrote were “Sweetie Little Jean” (based on a true episode from the Shultz’s youth, when a childhood playmate was abducted and murdered) and “Cold Cold Cold,”which developed from the idea of seeking medical treatment—not for an illness, but from life’s travails.

“It was apparent that a lot of the lyrics were going to be very personal and very story-based,” he says. “It felt way too revealing sometimes, but I wanted them to be real, with different layers, and to write songs about the scariest things to talk about—the things that everyone relates to.”

Tell Me I’m Pretty also involved major changes in the band’s roster and process. Lead guitarist Lincoln Parish left the group in 2013 to pursue a career as a producer; Nick Bockrath took over the spot, while keyboardist Matthan Minster concurrently joined the line-up.

“Going into the writing sessions I was feeling uncertain, because we had a formula with the first three albums that worked,” says bassist Daniel Tichenor. “A few days into writing, things began to click and we seemed to be developing a totally new and different sound. A new bond and friendship rekindled between us, and also, bringing in some new faces changed the dynamics and everything kind of felt like a fresh new start.”

The album also sees Cage the Elephant working with a new producer, their long-time fan and sometimes tour-mate Dan Auerbach of the Black Keys. “We set out to have a classic-sounding record but with a modern sonic depth, like hip-hop or dance music,” says Matt. “Working with Dan was great. He has an incredible concept of atmosphere and vibe, and capturing the raw, first response.”

“With Dan, you may not always get the most perfect playing,” adds Brad, noting that unlike their previous albums, these songs were mostly tracked live, some on the very first take. “But he picks out the emotion and the realness, the take that evokes something within you.”

Rooted in both tradition and experimentation, Tell Me I’m Pretty marks the most definitive statement yet from a band that fought hard to stake out its own territory in the music world. “When we were younger,” says Matt, “we had this picture of what a rock and roll band was supposed to be, and we were trying to live up to a persona.”

Inexperienced and impressionable, they headed from Kentucky to nearby Nashville, signing a production deal without even having a manager representing them. Trying to elbow through the hierarchy of local bands, they eventually decamped to London, where they lived hand-to-mouth in a neighborhood so dangerous that someone was murdered outside their front door.

When they finally acquired a manager and signed to then Jive, now RCA Records, they still didn’t see a single dollar from the deal—but they did quickly connect with the platinum-selling 2008 hit “Ain’t No Rest for the Wicked,” from their self-titled debut album.

Over time, though, Cage the Elephant grew increasingly sure of themselves and and, according to Matt, became determined to create music based on their own creative decisions, “not for commerciality or for obscurity for obscurity’s sake”.Thank You, Happy Birthday came out in 2011, reaching Number Two on the album charts, but it was with Melophobia, the members all agree, that the band truly came into its own—and on Tell Me I’m Pretty, they build on that assurance and enthusiasm.

“Within three hours of walking into the studio, we had ourselves a pretty unique, amazing track,” says Tichenor. “After that, each and every day I felt we were onto something, creating what I believe is our best work thus far.”

“I think that finally we all came together as a band,” says Brad. “For the first time, it just felt like those kids in Bowling Green, Kentucky coming to a practice space, jamming and having a good time.”