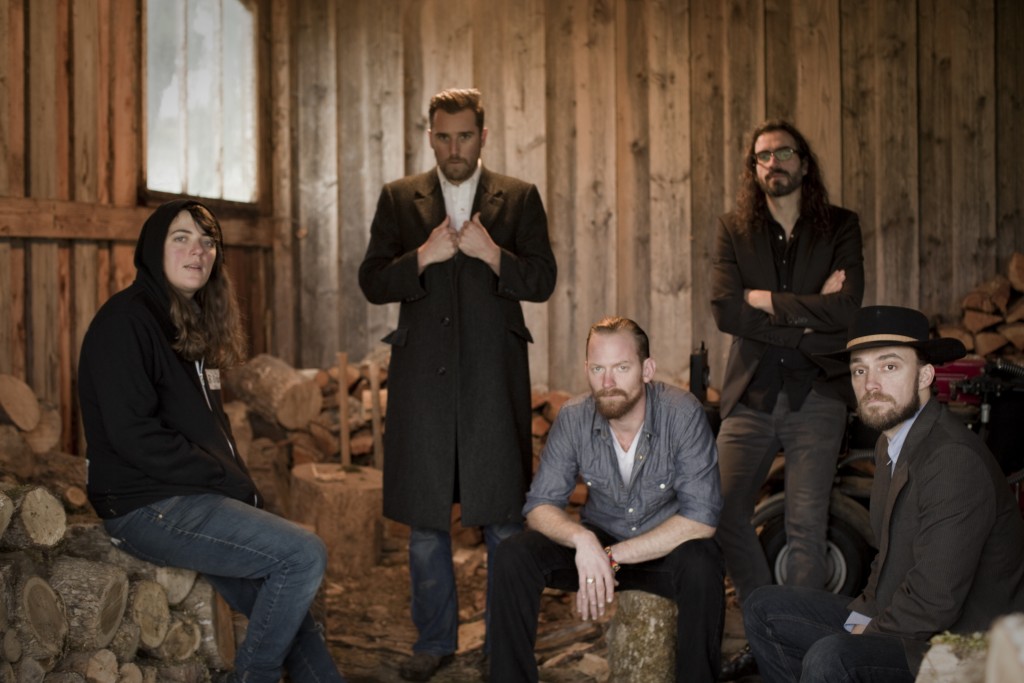 The first time they ever made music together, Fruition’s three lead singer/songwriters discovered that their voices naturally blended into stunning three-part harmony. Eight years after that impromptu busking session, the Portland, Oregon-based quintet has grown from a rootsy, string-centric outfit to a full-fledged rock band with an easy but powerful grasp of soul, blues, and British Invasion era pop. On their new album Labor of Love, Fruition shows the complete force of their newly expanded and electrified sound, matching their more daring musicality with sophisticated, melody-minded songcraft.

With Anderson, Asebroek, and Naja trading vocal duties and offering up their own singular brand of gutsy yet graceful songwriting, Fruition infuses each track on Labor of Love with timeless urgency and

three-part harmonies that never fail to enthrall.The follow-up to their 2013 album Just One of Them Nights, Labor of Love came to life over the course of a year-long process of exploring new sonic terrain that included everything from Phil Spector-esque pop to dreamy psychedelia to Motown-inspired soul. “In the past our approach was always to just get in the studio and get it done, but for this one we decided we were going to take all the time in the world to make the album great,” says Anderson.

Teaming up with engineer Justin Phelps (Amanda Palmer, Jolie Holland, Chuck Prophet), Fruition self-produced Labor of Love and mined major inspiration from the inventive precision of longtime Beatles producer George Martin. “This is the first album where we made a point of bringing out the character of each song to the fullest,” says Thompson, who helmed the mixing of the album. “With our previous albums we tended to treat each song the same, but this time we really went all the way with whatever sound we were going for.”Despite pushing into so many disparate directions, Labor of Love emerges as a wholly unified album that subtly imparts the sense of being swept along on a journey. That unity’s got much to do with an open-hearted spirit that sets in from the first notes of the dobro, mandolin and electric guitar driven title track, carries on to the sleepy soul of “Santa Fe,” then unfolds into the beautifully epic balladry of “The Meaning.” Another key factor in the album’sjourney-like feel: Fruition’s ingenious use of between-song transitions, such as the Brazilian-style percussion that lifts Labor of Love from the breezy R&B of “Above the Line” to the joyful worldbeat-folk of “The Way That I Do.” “We brought in a local band called Tapwater one night and enlisted their samba line,” recalls Asebroek. “They taught us all the drum parts and about ten of us formed a whole drumline, which was just a really fun and unique experience for the band.”

Though Anderson, Asebroek, and Naja each bring a distinct sensibility and boldly nuanced lyricism to their respective songs, a mood of warm melancholy instills much of Labor of Love. “A common theme for all three songwriters is trying to embrace being out on the road all the time, but also feeling like you’re missing out on the everyday lifestyle that most people get to have,” says Leonard. Embedded within that tension is a wistful romanticism that imbues many of the album’s songs. “Most of the love songs are very much about those rare moments of getting to be with the people you love,” says

Anderson. “And then other songs are about coming back to the people you love, and trying to deal with the strange ways things change because of being apart.” The band chose Labor of Love’s title to reflect that balance of sacrifice and satisfaction, Naja points out. “We don’t sleep nearly enough and we’re away all the time and we do work really hard,” she says, “but that’s our job, and it’s pretty much the best job in the world.”

All near-lifelong musicians, the members of Fruition came to Portland from varied corners of the country and gradually crossed paths by way of their adopted hometown’s music scene. “Mimi and Kellen were going to busk one day and I went along with them, ‘cause that’s what we always did to pay for that night’s dinner and drinks,” says Anderson. “So we started playing and just instantly nailed these three-part harmonies, to the point where we’d get done with a song and burst out laughing at how good it sounded.” The magic of those harmonies ended up proving instrumental in rounding out the rest of the band. “The first time I ever played with them, we were jamming in a friend’s attic and the harmonies surrounded me,” says Thompson, who joined Fruition in 2011. “I had goose bumps for an hour afterward, and I decided right then I was quitting my other band and moving to Portland.”

Releasing their debut EP Hawthorne Hoedown in 2008, Fruition devoted the coming years to relentlessly writing and performing, the band moved from busking on the street, to scraping their way onto the lower levels of festival lineups, to opening tours for bands like ALO and Greensky Bluegrass and onward to being invited to play bigger festivals with ever bigger billing on those lineups. Last year saw them appear at Bonnaroo, Northwest String Summit and Telluride Bluegrass where Rolling Stone cited their artful choice of covers and “raucous originals filled with heartfelt lyrics and stadium-worthy energy.” This year will see them share a Red Rocks bill with JJ Grey and Mofro and The Infamous Stringdusters, along with a full headline tour of the United States.

That breadth of touring experience has steadily reshaped the band and ultimately allowed them to achieve a sound they’ve long aspired toward. “A few of the songs on the new album actually came from years ago, in an era when we were much more of a string band,” says Thompson. “We’d imagined the songs in a particular way but didn’t have the ability or experience to get them where we wanted to be—we didn’t even own the right instruments.” But despite broadening their repertoire, a certain spirited simplicity still forms the heart of Fruition. “We all tend to write on acoustic guitar and let things start in the same stripped-down, folky sort of way that we always did,” says Naja. “So where the songs come from hasn’t really changed much at all. What’s different is where we let them go from there.”