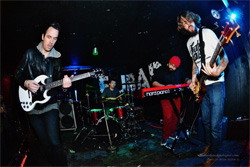 Despite a somewhat revolving cast of players, St. Petersburg’s own Zulu Wave have been able to ride a brand of sonically lush, ruminating avant-pop into the national spotlight. They were bright spots on the bills of the 2012 CBGB Music Festival and CMJ Music Marathon in New York City, and Michael Barrow’s voice on songs like “Puppy Tails” is a calming force that plays sonic foil to the sharp and brusque psych-prog madness on cuts like “Skataful Lies.” If bands like Muse and BLK JKS stayed in the garage to craft honest, hard-nosed rock, then they might sound like Zulu Wave.