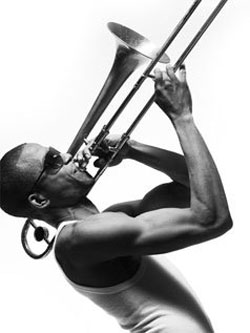 On his third outing for Verve Records, Troy “Trombone Shorty” Andrews further pushes the stylistic envelope with his genre-obliterating sound, a potent melange of jazz, rock ‘n’ roll, soul and other idioms Andrews absorbed as he honed his chops in the melting pot of New Orleans. Like its two predecessors, 2010’s Grammy-nominated Backatown and 2011’s For True, the new Say That to Say This (Sept. 10), co-produced by Andrews and kindred spirit Raphael Saadiq, sounds like nothing else out there, as Andrews and his longtime band, Orleans Avenue-guitarist Pete Murano, Bassist Mike Ballard and drummer Joey Peebles-continue their natural musical evolution. In a very real sense, the torch is passed from one great New Orleans band to another on the new album, which features the first new studio recording from the original members of the legendary Meters in 36 years, as they revisit their 1977 classic “Be My Lady,” with Andrews singing lead and playing horns.

The bandleader and multi-instrumentalist describes Say That to Say This as “really funky, like James Brown mixed with the Meters and Neville Brothers, with what I do on top, And we have a bit of R&B from Raphael’s side. All the guys in my band are big, big fans of his, so this is a real dream come true for us. And he’s a fan of New Orleans brass band music, which I didn’t know beforehand. Just listening to his music and the direction he’s going in now, I thought that he would be perfect to work with us. He’s a great producer, but he’s also a musician, so he was able to get in there, jam with us and take us to some different places. And we were able to take him to some different places too.”

Saadiq doesn’t just co-produce, he becomes a fifth member of the band, playing a variety of instruments and contributing backing vocals; he also had a hand in writing three songs. Says Andrews of Saadiq: “What drew me to him was his knowledge of what came before and his imagination of where the music can move forward to. That’s the same way I think, so it worked out very well.

“We felt a certain amount of pressure, because we knew we were working with one of the great young producers and musicians,” Andrews acknowledges. “But it was good pressure, and Raphael being in the room with us inspired us to step up as writers and players. We spent two or three weeks in the studio in L.A. working out the tracks, and I think having that stretch of uninterrupted time really played a big part in how creative we were able to get. On the last two records we were so busy touring that we would go in for three or four days and then go out for a week, so we had to switch on and off between the stage mentality and being creative in the studio. So this time, knowing we were gonna be in the studio for two or three weeks straight, we reached down deep and were able to do some things that we wouldn’t have come up with if we’d been on a tight schedule. It allowed us to be very free.”

The first track laid down for the album, the pumping “Long Weekend,” came together in a flash during Andrews’ initial foray to L.A. to hang with Saadiq. “I went out there to see how we would jell,” Troy recalls. “I met him and his band in the studio and they came up with that song for me, right in front of my face, and it was really fun to just sit back and watch it go down. It didn’t take that long-they were killin’ it. I put the horn parts on that same day. That track has a lot of energy; I love the way it feels.”

The next step was to see how Saadiq would jell with Trombone Shorty & Orleans Avenue. “The one where we really clicked for the first time was ‘Get the Picture,'” Andrews says of this burner, which has Saadiq’s fingerprints all over it, trading guitar licks with Murano and playing clavinet. “After that, he sat back and watched us work, and every once in a while he’d come in and make a suggestion,” says Andrews of the recording sessions. “So he basically let us do what we do and fine-tuned it if it needed it, and if it didn’t he just kept it the way we had it. And that was very inspiring, because if he thought it was cool, then we felt like we’d done what we needed to do on our end.”

The opening title track emphatically sets the vibe, as Murano unleashes a barrage of power chords over a pummeling groove from Peebles and Ballard-but a blast of brass from Trombone Shorty instantly alters the feel, bringing a more elegant form of aggressiveness to the proceedings. The mood then shifts again to a deeply soulful section in the manner of Earth, Wind & Fire, before powering back into rocking mode. “That track is just a timeline of who we are and how we think,” says Andrews.

“For most of the album,” he continues, “we wanted to get it as tight as we could performing it in the studio, so we’d just play the song straight through, but we couldn’t do that with ‘Shortyville,’ which was just myself and Raphael. I started that track by hitting a bass drum with a mallet, like you would in a New Orleans brass band; then I played a full drum set on top of it. We built it up from there part by part, with me doing the horns and Raphael playing the bass and guitar.”

Of “Fire & Brimstone,” the lead single, Andrews notes, “The beat I was hearing was an old-school hip-hop thing. I can’t remember what we were listening when we came up with the idea, it might’ve been something by Dr. Dre, Easy E or Run-D.M.C., but when I heard it, I said, ‘Joey, let’s do a beat like that underneath the track so I can do some intricate things on top.’ That’s what we did, and it came out with this swampy, voodoo feel.”

As for the impromptu Meters reunion, Andrews was listening to the band’s eighth and final album, 1977’s New Directions, one day, and as the smoothly soulful “Be My Lady” wafted out of the car speakers, it hit him that the track’s mellow, romantic vibe (“laid-back in the cut,” as he puts it) was exactly what his album in progress needed. But rather than simply covering it, Andrews got it in his head that he had to record it with the Meters themselves. When he told friends of his plan, they told him he was dreaming. Since breaking up soon after releasing New Directions, the four original members had performed together a mere handful of times, and only on stage for special occasions, never in the studio. What’s more, there was no manager to contact; Andrews had to call each one and ask if he’d be up for going in the studio with his former bandmates, not knowing whether presenting the idea would open any old wounds.

“With all four of them, when I asked the question, there was a second of silence,” Troy recounts with a laugh. “But then, each one of them said, ‘If you talk to the rest of the guys and they’re up for it, then I’ll do the track. And even if you can’t get everybody together, I would still love to play on it. So I was able to get all them to agree, and then I had to call all of them back to tell them it was on. So they all came to the studio, including Cyril Neville, who sang the original vocal; he does the background vocal and the ad-libbing on the new track. At the end of one of the takes, they started jamming, and you could see a sparkle in all of their eyes at the magic they could make together. Whatever their differences, whatever reasons they don’t work together, it went out the window for those few minutes, and I got a chance to experience what it used to be like when the Meters made all those classic records. I had the chills while it was going on.

“After we were done,” Andrews continues, “George Porter pulled me aside and said, ‘Thank you. You have gotten us to do something that people have been trying to get us to do for 35 years,’ and I was speechless. Because the Meters helped to create a sound that gave me a foundation for doing what I do. It was one of those magical moments in life for me, because in New Orleans, the Meters are like the Beatles.”

Saadiq is equally thrilled with the results of this musical summit meeting of young giants. “If you’re a producer or musician, you want to work with other great musicians,” he says. “because it only betters you, I was just honored to be a part of the project.”

Since the release of the For True, which spent 12 weeks atop Billboard’s Contemporary Jazz Chart, Andrews has recorded with an eclectic assortment of artist ranging from Zac Brown to Rod Stewart to Cee Lo Green, while taking the time to initiate a mentoring program at Tulane University via his Trombone Shorty Foundation. He’s appeared on the covers of Downbeat and Jazziz magazines, performed on Conan, The Tonight Show, Jimmy Kimmel Live and Late Night With Jimmy Fallon, and the band was chosen to play the closing set at this year’s New Orleans Jazz & Heritage Festival, a huge honor in the world of true music lovers.

But for Andrews, the biggest thrill of all was performing at The White House in February. “That was a dream come true about 50 times over,” he says. “When we started playing, I forgot I was at the White House because I was on stage with all this musical royalty-B.B. King, Mick Jagger, Booker T. Jones, Jeff Beck, Susan Tedeschi and Derek Trucks, Gary Clark Jr., the list goes on. And then, when I turned to the audience, there’s the President and the First Lady. I’m like, ‘This can’t be happening.'”

Good things continue to happen for Trombone Shorty, thanks to his virtuosity, charisma and relentless drive to bridge music’s past and future. That he pursues his passion with such humility and unpretentiousness makes his still-unfolding story as compelling as the music he’s making along the way.