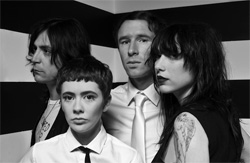 “The artist is the opposite of the idealist. The artist does not tinker with the universe, he recreates it out of his own experience and understanding of life.” -Henry Miller

Blur The Line feels like an eponymous debut. This record is not a departure, nor is it simply growth. It is a realization purely of where Those Darlins are as artists right now. With Blur The Line, Those Darlins take away the labels and constructs that people use to define, categorize and ultimately destroy. They don’t want to hide or create some manufactured mystery. They show it, reveal it. That revelation is more powerful than anything else.

Those Darlins entered the public eye in 2008. They took on matching surnames and announced themselves a gang of resilient outsiders, each a misfit of southern upbringing, with its problems and charms. Their self-titled debut carved out an ethos and a spot on the map. Their warning: they weren’t just anybody’s darlings; if you didn’t want them in all their wild glory, you didn’t need to hang. They followed that rural-tinged debut with Screws Get Loose – a spiky garage/art rock album that launched them onto the international scene. However, growth can be painful. In those travels and the travels that followed, the collective persona they had cultivated began to strangle their individuality.

Jessi, Nikki, and Linwood set out to uncover the true complex, contradictory nature of themselves as individuals and as a band. Over a year in the making, Blur The Line is the product of this search. It was written and recorded during their first extended time off the road since formation – this time with a lineup evenly divided between the sexes after the addition of Adrian Barrera (Gentlemen Jesse & His Men, Barreracudas).

The result is a record to file on your shelf between Patti Smith’s Easter and Fleetwood Mac’s Tusk. Blur The Line is a first-rate album of powerful tracks that mingle heavy rhythms and distorted Neil Young guitars with ear-candy harmonies and a slew of captivating lyrics. The band called on Roger Moutenot (Yo La Tengo, John Cale, Jeff the Brotherhood) to produce Blur The Line, and it turned out to be a revelation – a chance to stretch and give shape to their work with his supportive, laid back demeanor and experienced hands at the helm.
Blur The Line is a look inward, asking bigger questions and tackling an archetypal theme – the opposing forces that lurk in us and in our world. “This may be the most important theme on this record,” says Nikki, “Balance and finding balance within ourselves and others.”

This isn‘t mopey existentialism; it’s a salute to what’s always been at odds in our world, and the beauty that comes from that friction. Asking big questions leads to great art. The record is an exploration of dualities: masculinity/femininity, nature/civilization. Blur The Line is nothing if not forthcoming, laced with sardonic humor and overt sexuality, coupled with sincere vulnerability and often brutal honesty. “I don’t think a three piece female band could have made this album,” notes Jessi. “Nor could an all male band.”
On BTL, it’s Those Darlins’ ability to balance and love both the masculine and feminine powers (as all great rock does) that gives them potency, and in that crucible, great music is made – without the reductive and often exclusionary world of “women’s” rock. Feminist critics deride oevres by bands like Led Zeppelin as oppressive and one dimensional while ignoring their long womanly hair, flowing shirts and moaning falsettos that sing, in truth, of women’s actual power, albeit to the sound of phallic guitar thunder. On the other hand, Patti Smith makes no apologies about her love of men and male-created art. She understands the power of both male and female etc, and chooses simply to be an artist. Balance.

The sparks of the band’s self-scrutiny may have been lit during the band’s European tour last summer. A German radio interviewer asked of the band, “Are you optimists?” After some blank stares, Linwood moved the conversation along. But Jessi couldn’t shake the question – or her inability to answer it. “I was hung up on the realization that the answer was no. I remembered a time when I was an optimist, but somewhere along the road that had changed. I wanted to get back to an optimistic point of view.” Her eventual reply became the lead lyric in one of Blur The Line’s most potent numbers, “Optimist”—”Used to be an optimist / It got too dangerous.”

Listening to the album’s bookend tracks, we hear the band’s musical and thematic approaches at work. Their modern take on the underpinnings of rock and roll is revealed, bubbling up from the gritty traditions of both white rural folk and African American blues. Starting with the graphic, moving narrative of “Oh God,” a modern fable that chronicles a shadowy exchange with an unsettling host of visuals, and ending with “Ain’t Afraid,” a vivid and blustering 12-bar declaration, the album’s narrative comes full circle. “I don’t know what lays in store / but I ain’t afraid anymore,” sings Jessi. Facing fear leads to empowerment.

The coming months will have Those Darlins back on the road, doing what they’re known for: delivering some of the most dynamic and indelible live shows today. Come ready. As Jessi shouts on the anthem “Western Sky,” “I don’t wanna hear another civilized roar / Let’s make our own noise.”