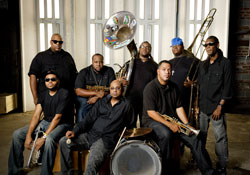 The SOUL REBELS formed when Lumar LeBlanc and Derrick Moss, originally members of New Orleans’ iconic Dejean’s Young Olympia Brass Band, decided they wanted to play the new, exciting music they were hearing on the radio while respecting the tradition they loved. Both New Orleans natives, the pair was steeped in the fundamentals of New Orleans jazz, but inevitably, contemporary styles of music began to seep into their psyches. While LeBlanc attended the famed St. Augustine High School, Moss went to Lil’ Wayne’s alma mater McMain High School, and paraded alongside soon-to-be Cash Money Records CEO Ronald “Slim” Williams in the school’s marching band. New sounds were all around and they found them as exciting as the horn-combo style featured in jazz funerals since the turn of the Twentieth Century.

“We wanted to make our own sound without disrespecting the brass tradition,” LeBlanc recalls, “so we knew we had to break away.” They found a stylistic middle ground when they spun off and formed a band of young, like-minded local players from all over New Orleans. Graduates of university music programs throughout the South, the band took the marching band format they had learned in school and incorporated influences from outside the city as well as late-breaking local styles – R&B, funk and hip-hop – especially through half-sung, half-rapped lyrics. “Most of our originals have vocals,” says LeBlanc. “You wouldn’t have done that in a traditional brass band.”

Soon, the Soul Rebels’ contagious originals and updated takes on standards won them a loyal local audience. They began rocking some of New Orleans’ most beloved live music venues. A chance gig opening for the Neville Brothers got them a real start-and an official name. It was youngest brother Cyril Neville who first called them “Soul Rebels,” a good name for a band that strived to incite positive change in its treasured musical heritage. Since those days, the band has settled on an eight-piece lineup, building a career around an eclectic live show that harnesses the power of horns and drums in the party-like atmosphere of a dance club. Their weekly show at Uptown New Orleans spot Le Bon Temps Roule has been known to descend into a sweaty shout-along as the band mixes up songs from its five studio albums with hits by Jay-Z and OutKast.

While touring the U.S., the Soul Rebels have shared the stage with notable artists from many corners of the pop and jazz worlds, including Arcade Fire, The Roots, Bootsy Collins, Robert Plant & Jimmy Page, Counting Crows, Green Day, Drive By Truckers, James Brown, Roy Hargrove, Allen Toussaint, Chuck Brown, Terence Blanchard, The Gap Band, Better than Ezra and many more. Averaging around 250 shows per year, the Soul Rebels have brought the party to stages as far away as South Africa and Europe, playing some of the world’s best-known music events, including, Umbria Jazz Fest, Antibes Jazz Festival, The Montreal Jazz festival, Bonnaroo, the Wanee Festival and, of course, the New Orleans Jazz and Heritage Festival.

When Hurricane Katrina struck their hometown in 2005, the band scattered across the region. Though a few members relocated to cities in Texas, the band frequently reconvened for gigs in New Orleans, this time with a renewed purpose. “Music has been the number one vehicle for Katrina recovery,” says LeBlanc. “That catastrophe has brought so much world wide attention to our music.”

Indeed, since the storm, the band has been more successful than ever serving as an international ambassador of the New Orleans sound. Now a hardcore touring band with a solid-as-ever lineup, the band has recently represented its hometown on television, appearing in the season finale of the HBO series Treme, the Discovery Channel hit After the Catch, and the NBC broadcast of the parade before the Saints’ winning 2010 Super Bowl.

In January of 2012, the band will finally release its first international album, Unlock Your Mind, on Rounder Records. This new song-driven studio effort includes guest appearances by Cyril Neville, Trombone Shorty and Meters guitarist Leo Nocentelli. The album was produced by Rounder VP of A&R Scott Billington, who was also at the helm of many of the Dirty Dozen Brass Band’s groundbreaking albums.