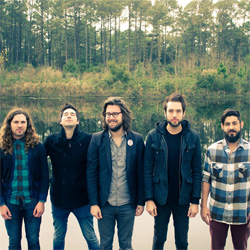 Berlin and Jared Bowser came together as kids, collaborating on musical projects first inside the church and then later out. JB and JB grew to become BFF, a bond that eventually nullified the demand to practice. Often SB! play a new song for the first time ever while already on stage.

Although glorious and giddy via recordings, the dudes bring unprecedented joviality to their live show, incorporating vibrant projections and inciting crowd response. The proof is in the breathless audience members as the last tom drum strike cracks. Late 2011 came and the ‘BEARS! packed up the Scion to headline their very own national tour. They also joined the likes of Mates of State, Gil Mantera’s Party Dream and The Black Kids on cross-country rounds, bringing their bliss to the masses across the nation.

Among the masses of ‘BEARS! fans is the tiny masses, specifically devotees of the children’s musical show Yo Gabba Gabba. The band performed several dates on the program’s southeast tour as well an episode featuring SB! original “Imagination Adventure.” Here’s a crew that does not demand the attention of only a certain demographic.

In 2011, Berlin and Bowser recorded their debut full-length ‘You Will Live Forever’ at New York’s Singing Serpent Studios. It dropped on Florida-based label New Granada last fall and has since enjoyed a limited-edition color vinyl run.