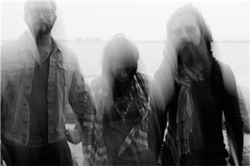 Florida-based Psych-Space rockers, Sons of Hippies, take flight on the backs of mythical, winged beasts to bring you Griffons At The Gates Of Heaven, the band’s newest and most ambitious recording to date, released July of 2013 on Cleopatra Records. Mixed by legendary Seattle producer Jack Endino (Nirvana, Mudhoney, L7) and mastered at Abbey Road Studios, the album fearlessly synthesizes four decades of rock with heavily echoed, neo-Surf guitar, sinister mellotron and crunching power chords. Rose, the album’s second single, has achieved extensive support at radio, debuting on KROQs Rodney On The ROQ program earlier this month as well as landing on CMJs Top 200 chart. Simultaneously, the band has been touring across the eastern states, including special engagements with UK prog legends Nektar and ex Soul Coughing frontman Mike Doughty.

Conceived by the spiritual union of guitarist/vocalist Katherine Kelly and drummer Jonas Canales, Sons of Hippies began their journey in 2008, adding bassist David Daly to the fold in 2011. Daly has since shifted to the synth/effects position as the trio brought Morgan Soltes on as bassist. True to their name, the band struggles to maintain the hopeful humanism of their 60s forebears while living in today’s ambivalent post-modern society.

But the band isn’t all ponderous philosophy – Griffons’ firs single video, Spaceship Ride, is a musical peyote trip back to child-like innocence, while the video for Rose cheekily sends-up 70s exploitation flicks with the band themselves cast as the surprised victims of 3 blood-lusty females. As UK magazine Vive Le Rock enthused in their review of Griffons Psychedelia just got sexy.

Griffons At The Gates Of Heaven is available on CD, vinyl and cassette.