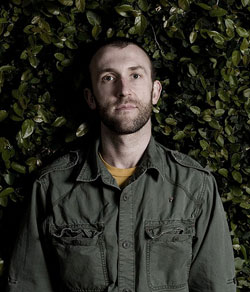 Hot butter and popcorn. Bleu cheese and a burger. Whipped cream and pie. Certain things just manage to complement each other in a manner that results in a sum much greater than its parts. The duo of rjd2 and Aaron Livingston is precisely one such example. Bringing together the detailed, complex production stylings of the former with the raw, soulful voice of the latter has resulted in an explosive new collaborative effort: Icebird.

Hailing from the city of brotherly love and a mecca for soul and jazz music, the duo draws upon the history of psychedelic soul music that groups like Rotary Connection, Funkadelic, and TV On The Radio both pioneered, and continued. While working in a one singer-one producer format, the album covers far more ground than your average group ever could; from the cut-and-paste vibe of “Charmed Life” to the organic, natural feel of “Just Love Me”, sampled drums, 80’s drum machines, and real live drum kit tones abound. Angular chops of riffs in certain passages give way to flowing, ethereal synths in another. From headbangers like “Going and Going” to the ballad “In Exile”, the versatility of the group shines throughout the album. So, what’s the back story, you say?

Aaron Livingston has been knocking around the Philly music scene for years. Participating in the Black Lily jams that birthed such stars as Jill Scott and Musiq Soulchild, He was featured on The Roots’ track “Guns Are Drawn”, a perennial DJ favorite off the Game Theory album. Heading up the group The Mean, Aaron continued to put his stamp on the Philly music scene. And then collaborating with RJD2 on the 2010 Colossus track “Crumbs Off The Table”, things have been bubbling for him for years.

As for rjd2, a 10-year recording career, composing the Mad Men theme music, featured tunes on ads from Blackberry to Radio Shack to Wells Fargo, and tours galore have kept him quite busy. Now releasing music on his own label, RJ’s Electrical Connections, he has taken a level of control and direction to his career that not many can claim. Icebird marks the newest addition to the label’s roster.

In rj’s own words, what makes Icebird special is that “it is truly a best-of-both-worlds collaboration. More than as a player, singer, or engineer; production is my strongest suit. And Aaron is truly one of the most unique, clever, and gifted singers I’ve ever had the pleasure of working with. The two elements complement each other perfectly.” We’re confident you’ll agree once you hear the album.