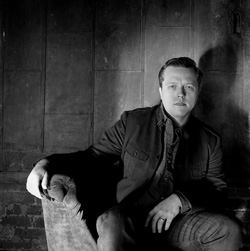 Southeastern is not a record Jason has made before, and not simply because the glorious storm and drama of his band, the 400 Unit, is absent. They will tour together; it’s not a break-up record, not an album of dissolving, but, rather, songs of discovery. And not at all afraid, not even amid the tears.

Which is to say that he has grown up.

That it has been a dozen years since he showed up at a party and left in the Drive-By Truckers’ van with two travel days to learn their songs. And then taught them some of his songs in the bargain.

Jason Isbell’s solo career has seemed equally effortless, from Sirens of the Ditch (2007) to Jason Isbell & The 400 Unit (2009), through Here We Rest (2011) and last year’s Live From Alabama. Loud records, unrepentantly southern, resplendent with careful songwriting. Songs which inspire and intimidate other musicians, and critics.
“
A heart on the run / keeps a hand on the gun / can’t trust anyone,” Jason sings just now, his words brushing gently atop an acoustic guitar figure “Cover Me Up,” the song with which he has chosen to open Southeastern. Such tenderness. An act of contrition, an affirmation of need, his voice straining not to break: “Girl leave your boots by the bed / We ain’t leaving this room / Till someone needs medical help / Or the magnolias bloom.”

Raw, open, and reflective. Sobriety can be like that. Jason’s made it past his first year, which is rather more than a promise and will always be far from a guarantee.

Treatment programs teach that one should let go, easier said than done. Perhaps that’s why

Isbell was willing to trust his songs to David Cobb. Cobb has produced Shooter Jennings and Jamey Johnson and the Secret Sisters, but it was a Squidbillies’ session with George Jones which finally brought his work to Jason’s attention. “The song that he did with George Jones was a minute and a half, two minutes long,” Jason says, But the production of it was perfect because he nailed every single era of George’s career, and that really impressed me. A lot.”
Jason Isbell chooses his words carefully and speaks them softly, only the gentle lilt of south Alabama left for shading. “A lot of my favorite songwriters and recording artists are afraid,” he says. “Afraid to turn anything over to a producer, so they continue to make the same record over and over and over and over. More often than not, really. It’s really frustrating for me.”

There had been other plans for the album, as there always are, and for the first time Jason had the songs done well before production commenced. In the inevitable way of things, it all came together in a rush. They finished recording at midnight on a Thursday. Friday he and Amanda Shires went to their rehearsal dinner, got married Saturday, and had to wait until they returned from their honeymoon to approve the mastered album.

It is Amanda’s voice and violin joining with Jason on “Traveling Alone,” as evocative a song of a loneliness as anyone’s written since “Running On Empty.” A promise.

The songs are invested with Jason’s particular, personal truths, but they’re not about him. Or, rather, the emotional truths are probably about the songwriter, but not the stories he’s telling. “Live Oak” opens with an a cappella verse: “There’s a man who walks beside me / He is who I used to be / I wonder if she sees him / And confuses him with me?” It is the kind of question a man asks as he readies to marry a woman who met him and knew him and loved him before sobriety stuck (and a question a singer might well ask his audience under the same circumstances), though the story is about a roving criminal in either the 18th or 20th centuries.

It is not, to be clear, an acoustic album. “Flying Over Water” and “Super 8” have more than the requisite amount of guitar squawl to propel them. But it is the quite, contemplative songs that lure you in out of the rain, and those songs especially that draw one into the arc of the entire album. To the elegance of “Songs That She Sings in the Shower”: “With a stake / Held to my eye / I had to summon the confidence needed/To hear her good-bye.”

“I’ve done my part,” Jason says, his dry chuckle trailing off. “I make things and other people try to sell those things. I try not to mix the two together. I think that’s just a better way to make more quality things.”

He is, of course, right.