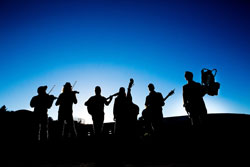 With feet firmly planted in the old-time song tradition, hands soiled by the dirt of rock n’ roll and eyes fixed steadily on the future of real country music, the Hackensaw Boys are among the most exciting groups charting new territory in today’s diverse Americana music scene.

How does it work?

Where do they come from?

In the beginning they all lived in Charlottesville, VA, but now the seven members are spread throughout Virginia, West Virgina, New York, and New Orleans. For more than a decade, however, they’ve come together to tour the United States, Europe and the U.K. and to record several critically acclaimed albums.

When asked in March of 2012 to play a show in celebration of the life of a fallen fan in Kinderdijk, The Netherlands, the Hackensaw Boys proudly accepted. On February 15th, 2012 Rene Verkerk was killed in an accident by the scoop-wheel of his windmill. The weeks following his death, friends and family gathered round and found the Hackensaw Boys were a mutual passion and comfort. Rene was a huge fan of the band and injected most of his relationships with their music.

On Thursday, May 24th, over 200 friends gathered in Cafe De Klok, the local pub, for Rene’s celebration of life. The theme of the concert was the Hackensaw Boys’ song We Are Many. From this memorial show, comes Hackensaw Boys – For the Love of a Friend, a 16 track CD including Keep It Simple and Can’t Catch Me, with a 35 minute bonus DVD.

2012 also saw the release of The Old Sound of Music, Vol. 1 and The Old Sound of Music, Vol. 2, deliver original material that draws upon the songwriting talents of its members. These six-song collections are the result of recording sessions held at the decaying but comfortable Sound of Music studios on Broad Street in Richmond, VA before it moved to its new location. The recordings were mastered by Grammy award winner Charlie Pilzer at Airshow Mastering in Takoma Park, MD. As with the group’s previous album, Look Out (Nettwerk Records, 2007), all songs were engineered by Library of Congress archival audio restoration specialist (and all around good guy) Bryan Hoffa.

In the fall of 2000, twelve musicians and a photographer friend left the Blue Moon Diner in Charlottesville, VA in a 1964 GMC motorcoach (“The Dirty Bird”) and circled the country on a six-week tour of theaters, bars, street corners and alleys.

The Hackensaws have toured with a bevy of diverse acts that were quick to embrace the group’s sound and songcraft, including: The Flaming Lips, Cracker, Modest Mouse, Camper Van Beethoven, The Detroit Cobras, Cake, Railroad Earth, Cheap Trick and De La Soul.
In 2003, the Hackensaw Boys were honored to serve as Charlie Louvin’s backing band on that Country Music Hall of Fame member’s nationwide tour.

Appearances at numerous festivals including Pukelpop in Belgium, Bonnaroo in Tennessee, Bergenfest in Norway, Telluride in Colorado, Belfast Folk Festival in Ireland, Floyd Fest in Virginia, Lowlands in the Netherlands, Pickathon in Oregon, and more…