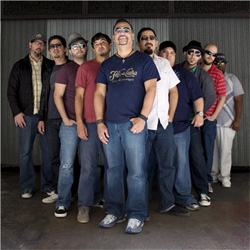 Grupo Fantasma has been praised as one of the most important independent acts in the Latin genre and has continually defied expectations to create one of the most unique musical voices to come out of the United States in the last decade. In 2011 they garnered further acclaim by winning a Grammy (their second such nomination) for their self-produced release El Existential on Nat Geo Music which the Wall Street Journal called “Latin music both new and traditional…vibrant fusions that transcend easy classification.”

The band’s incendiary live show, declared by NPR as “seamless whenever and wherever they’re on stage” has brought the band to major festivals and venues internationally including Bonnaroo, North Sea Jazz Festival and Lowlands in the Netherlands, Kennedy Center, London’s O2 Arena, Montreal Jazz Festival, WOMEX, Tempo Latino (France) as well as two tours to Kuwait and Iraq to entertain US troops. Their diverse spectrum of rabid and devoted fans such as Rodney Anonymous from the Dead Milkmen and Stu Cook from Creedence Clearwater Revival speaks to the ensemble’s universal appeal beyond just Latin or world music fans. In addition, they have worked or recorded with Maceo Parker, Sheila-E, Curt Kirkwood of the Meat Puppets, Ruben Ramos, GZA of the Wu-Tang Clan, cult-hero Daniel Johnston and many others.

Grupo Fantasma has also seen a wide array of film and TV placements including AMC’s Breaking Bad, the John Sayles’ film Casa de los Babys, Showtime’s hit series Weeds, ABC’s Ugly Betty, NBC’s Law & Order and many others. They have served as the backing band on several occasions for the legendary Prince (ALMA Awards on ABC, Golden Globes, CBS Super Bowl Bash), Fania All-Stars pianist Larry Harlow, Sheila-E, GZA of Wu-Tang Clan and indie rock standouts Spoon. In 2012 and 2013 they continued to tour the globe with club and festival dates in anticipation of their next studio release, a full-length album produced by Multi-Grammy award winner Steve Berlin of Los Lobos.