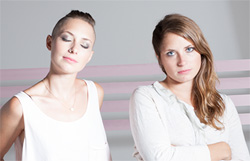 With a kickstarter funded debut “Get Great Tour,” the Graeff twins traveled the US nonstop to promote their premier EP “Better Half,” and they don’t plan on slowing down anytime soon. Good Graeff has already started laying down tracks for a new EP, recorded pop covers for Cleopatra Records, filmed three new music videos and played Midpoint music Festival. “Spreading our music is so important,” says Brit, “there is no sense in slowing down if you have momentum.”

The group originated as a busking duo when the twins were 16, playing on street corners of Sarasota, FL, where they spent their teenage years. At 18, Brooke moved to Canada to become a foley artist (check out her imdb) and Brit studied marketing and international business then packed up her bags to travel around Europe and India, then eventually settled in Hanoi, Vietnam. Brooke joined her there in 2012, and Good Graeff was born into its second life, a little less than ten years later and ten thousand miles away, though again on a street corner. The band still retains a dedicated following in Vietnam.

Brooke: “It’s not easy living in a van and constantly touring, but I think thats what we like about it. It’s not something everyone can do. It really pushes us to always be doing bigger and better things, like ride unicorns and braid our hair.”