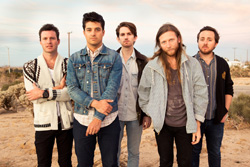 When it came time to record Delta Spirit’s third album, the band members knew one thing: It was time to shake off the stylistic labels that have shadowed them since they formed in San Diego, CA, in 2005. Though lyricists Matt Vasquez and Kelly Winrich were grateful for the warm reviews that their previous albums Ode To Sunshine (2008) and History From Below (2010) received, they were perplexed at being called “rootsy Americana” or “twangy folk.” In their eyes, Delta Spirit has always been a thoroughly modern rock band, and, with their self-titled new album, they set out to prove it.

We found the sound that we’ve been looking for, that we’ve been growing into, and as soon as we hit on it, we ran with it,” Vasquez says. “That’s why it’s a self-titled record, so we could connect our identity with the album, because this album is what we think Delta Spirit is. People make records for their time and we wanted to make one for our time. Just like novelists want to write the Great American Novel, we wanted to make a Great American Record. Not one about yesterday, but one about right now.”

To help them realize their vision, Delta Spirit recruited producer Chris Coady, not only for his indie-rock credentials (he’s worked with Yeah Yeah Yeahs, TV on the Radio, Beach House, and Smith Westerns, among others), but also because, with five strongly opinionated band members, Delta Spirit needed a producer who wouldn’t be pushed around easily. “We also wanted a great engineer and someone who knew how to make sounds that didn’t sound stock and average,” Vasquez says of Coady, who brought in a home-built synthesizer, which was used on the song “Home.”

The band also experimented sonically, creating layers of texture by using previously verboten instruments like MPC samples and drum machines. They also empowered their new guitarist, Will McLaren, to create stand-alone parts, and to go to town on electric instruments. The experimentation can be heard throughout the album, which opens with the rollicking opening number “Empty House,” and serves as a transition between Delta Spirit’s previous sound and its new one. “The intention was to introduce the album with something that hints at what we used to sound like,” Winrich says. “We wanted to ease people into it.” The band, who recorded the album at Dreamland – a converted church built in 1896 in Woodstock, New York – also upended traditional song structures, playing around with writing songs with no choruses (“California”) and generally throwing off simple verse-chorus-bridge conventions, making sure each verse felt different from the one that preceded it.

When it came to lyrical content, Vasquez and Winrich stuck to what they knew. “We’re not hearkening back to anything in the lyrics,” Vasquez says. “We’re writing about situations that are mostly personal. I think the topic of love has affected us the most.” The most direct approach comes from Winrich. “My songs all seem to pertain to one situation, a failed relationship,” he says. “‘Anyone who’s been in a long-distance situation will be able to relate to ‘California.’ ‘Otherside’ is about being delusional and holding onto something that may or may not be real, and ‘Time Bomb’ is about being blind to what the future holds and how happiness and sadness are kind of intertwined.”

Several (though not all) of Vasquez’s songs tend to make their points through the perspective of others, a style favored by some of his favorite songwriters, including Tom Waits and Nick Cave. On “Empty House,” he takes on the persona of a construction worker who is seeing the Dharma in his work. “This guy is mixing concrete and suddenly notices the tiny glinting specks in it,” Vasquez explains. “He begins to wonder ‘What got me here? Where am I headed’ and relating that little speck to his life.” “Tellin’ The Mind” is about Colton Harris Moore, the teenager known as the Barefoot Bandit who became an internet sensation after committing several burglaries, and stealing and crashing a plane. “I loved him,” Vasquez says. “I thought he deserved an anthem.” “Tear It Up” was originally inspired by the events in Egypt during the Arab spring, but morphed into a more universal song about what can happen with people get together with a common goal. Vasquez’s most personal song is “Yamaha,” which he wrote for his wife when she grew upset about his being away on tour for long stretches of time. “I felt like shit but I couldn’t do anything. A guy’s first instinct is to fix it, but you can’t when you’re three time zones away, so I wrote this song for her.”

The album’s raucous energy and no-holds barred performances will appeal to Delta Spirit’s fanbase, which has grown consistently thanks to their explosive live shows. The band, who have completed headlining tours of the U.S. and Europe and appeared at SXSW, Bonnaroo, Lollapalooza, and Coachella, are looking forward to hitting the road and playing the new songs. “There’s no other experience on earth like playing music with people and feeling that kinetic energy,” Vasquez says. “I want to do it even when I’m old and it’s ridiculous to see me on stage. If I can hold on to even a tenth of the feeling we have when we’re playing, I’ll be happy.”