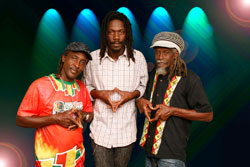 Culture is reggae’s preeminent harmony group. Born in the 70’s golden age of reggae, the ever viable Culture garnered continual US and international acclaim for its long series of classic “roots” albums. Culture’s legendary “Two Sevens Clash” (Shanachie) was Reggae Album of the Year in 1977 and is acknowledged today by Rolling Stone Magazine (April 11, 2002) as #25 of the 50 all time coolest records (the only reggae album to make the list).

CultureReduced sizeCulture’s music, featuring the shining lead vocals of Joseph Hill, is solidly roots, perfectly executed and delivered with genuine emotional fervor. Joseph Hill’s devotion to the traditional Rastafarian values of purity, simplicity and justice is exemplified by Culture’s lyrical themes. Milo Miles, writing for The New York Times, named Culture as “the leading exponent of “conscious reggae'”. Hill’s message is clear and uplifting. His songwriting abilities are outstanding and music reviewers have lauded his achievements for two decades.
Born in St. Catherine, Jamaica and involved with music since early youth, Joseph Hill began his professional recording career in 1972 with the single “Behold the Land.” By 1976 Joseph and his cousin Albert Walker had formed a trio whose name evolved into Culture with the release of the mythic “Two Sevens Clash.” Joseph Hill performed solo under the name Culture and recorded several projects during the early eighties; he and Albert subsequently reunited and produced a long series of critically acclaimed recordings. In fact, Culture’s entire body of work (over 28 albums) can be recommended almost without exception. Noted albums such as “Nuff Crisis”, “Cumbolo,” and “Wings of a Dove” virtually define the “roots” genre.

Culture’s level of energy and creativity are consistently superlative. They have performed brilliantly to spellbound audiences at countless festivals, concerts and clubs around the US and throughout the world. Culture’s backing band provided cohesion and energy behind the sweet harmonies of Albert and Telford Nelson and Joseph’s dynamic lead vocals.

Kenyatta Hill’s career began the day his father’s ended. Joseph Hill, singer and songwriter for the legendary Jamaican vocal trio Culture, collapsed and died while on a 2006 tour of Europe. To the amazement of promoters, fans and critics alike, Kenyatta stepped onstage and delivered electrifying performances time and again – nineteen shows in all – until the tour was complete. This was unheard of in any genre of music at any time. Kenyatta gave of himself so totally – as his father had for so many years – that the two seemed to become one, the eerily similar voices and the vibes igniting the critics and yielding a new reggae mantra “magic, not tragic!”

At the Ranny Williams Center in Kingston Jamaica at the memorial concert for his father, Kenyatta’s performance with Culture was the highlight in a star studded night and garnered him the rousing support of the hard-to-please Kingston reggae audience. Kenyatta went on to front Culture in a series of performances in the US, Caribbean, Brazil, Argentina and Peru, again leaving audiences amazed and delighted.

Influenced by elements of dancehall, grounded in the roots tradition and motivated to carry on his father’s work, Kenyatta set to writing – to finish songs that Joseph had started and create new music of his own. On his poignant debut single, “Daddy,” (Tafari Records), backed by a masterful roster of musicians including Sly Dunbar and Dean Fraser, and produced by Lynford “Fatta” Marshall, he confronted the emotional pain and uncertainty he felt after the loss of his father. He cried while he wrote, just as audiences in Europe had cried while he sang.
Pass the Torch, the complete CD described as having “a collector’s item feel,” was released in 2007 to longtime Culture fans and critics who have embraced the son, named for Jomo Kenyatta, the first Prime minister of Kenya. With its “very lovely and high level vibe” Kenyatta Hill’s first CD prompted one longtime Culture fan to proclaim “Culture is ALIVE.”

Indeed, Culture featuring Kenyatta Hill continues to share the wisdom of Joseph’s conscious reggae overlaid with Kenyatta’s own lively and youthful musical vision. Touring in support of Pass the Torch with a number of festival appearances continued throughout 2009, including most recently a highly successful US tours with Beres Hammond in 2009 and 2010.

2011 saw the release of ” Live On ” a highly acclaimed tribute to the music of Joseph Hill and Culture with Kenyatta performing fresh renditions of some of their classic compositions..