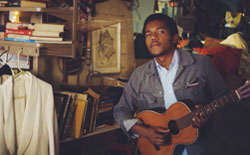 Eleven minutes and 34 seconds – that’s the total length of Benjamin Booker’s debut EP, Waiting Ones. And in that time, shorter than a lot of Jerry Garcia guitar solos, Booker manages to establish himself as one of the most exciting new artists in New Orleans.

Born in Virginia and raised in Tampa, Benjamin spent the last few years kicking around Gainesville where he played guitar at friends’ houses and studied at U of Florida. He recently took a job here in New Orleans. Just before moving here, he spent a couple weeks at home to save some money before the move. In those two weeks he recorded five songs, using a beat up old classical guitar and his sister’s laptop. The result is Waiting Ones.

The temptation of any writer is to let the crazy story of this album overshadow the music (Recorded on his sister’s laptop! Did the whole thing in a couple weeks!) but it’s not fair to this EP. By turns funny, soulful, spiritual, and nostalgic, this brief album showcases an honest voice and – not to be corny – a spirit.

On the bar-stomp blues track “Have You Seen My Son” Booker wails his way through a standard blues progression, then closes with a gnarly guitar solo that’s hard not to love. On “I Thought I Heard You Screaming”, the acoustic guitar reminds one of early My Morning Jacket, and closes with Booker asking a question every New Orleanian has asked at one point or another: “Did you love me, or was it the drugs?”

Booker says that someone once described his music as “gospel punk”, and I’m at a loss to come up with a better descriptor. Welcome to New Orleans, Benjamin. We’re glad to have you.