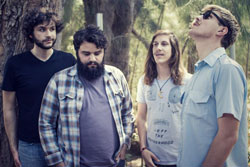 Folk-pop quartet Alexander and the Grapes don’t need schmancy production to get across their honest, straight-up sound and sentiment. In fact, they don’t even want it. The St. Petersburg, Fla. dudes cherish the romance of analog recording, an appreciation evident in their organic, twang-tinged efforts.

Overwhelming support from fans through Kickstarter allowed AATG to hit Esthudio in Boston and get to work. June 2012 brought the group’s first proper, widespread release. It dropped on Florida label New Granada and via the band’s personal vinyl/cassette imprint, Viva La Records!. Hemispheres captures The Grapes’ creative versatility and stranglehold on emotional honesty.

Much of AATG’s lyrical fodder deals with classical human struggle-coming of age, death, fate and dealing with disappointment. Charos doesn’t need a fat book of SAT drivel to get across his points, opting instead for a very open, effectual vocabulary. Then the band together pairs such words with glossy keys and brass, steel guitar and soft, pastoral vocals. The result is a cattail-walled room of audio truth, with the occasional illuminating breeze gushing through.