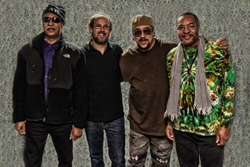 It’s no stretch to say that The Meters singlehandedly defined New Orleans funk. Performing and recording their own music throughout the latter half of the ’60s and into the ’70s, this seminal group laid the foundation for what is now a ubiquitous genre, influencing countless funk musicians with their earthy, down-home style. Tracks like “Cissy Strut,” “Look-Ka Py Py,” “Sophisticated Sissy,” and “Chicken Strut” are staples of the funk genre, and the band’s work backing artists like Dr. John, Robert Palmer, Lee Dorsey, and even Paul McCartney is instantly recognizable. The Meters’ sound also provided a jumping off point for much of the hip-hop of the ’80s and ’90s, with rap luminaries like LL Cool J, Big Daddy Kane, Run DMC, Ice Cube, Public Enemy, A Tribe Called Quest, and more sampling the band’s tracks.

Formed in 1965, the original Meters lineup featured keyboardist and vocalist Art Neville, drummer Joseph “Zigaboo” Modeliste, guitarist Leo Nocentelli, and bassist George Porter Jr. After a few months playing under the name Art Neville & The Sounds, the band was hired by famed producers Allen Toussaint and Marshall Sehorn as the house band for their Sansu Enterprises label. The Meters did most of their backing work for this label. They also performed and recorded on their own, releasing Top 40 instrumental hits on both Josie Records and Reprise Records well into the ’70s. Although they never truly broke into the mainstream, by the middle of the decade, The Meters were a huge hit among the music intelligentsia.

The Meters broke up in 1977, and all of their members went on to find significant success elsewhere in the music business. Neville gained fame as part of The Neville Brothers, Modeliste toured with Ron Wood and Keith Richards, Nocentelli and Porter started new bands and they all became in-demand session players. In recent years, various iterations of the original Meters lineup have reconvened for numerous one-off shows, including full reunion performances in 2005 and 2011.

The Meter Men founded in 2009 first performed as a trio at The 40th New Orleans Jazz and Heritage Festival and shortly after that – Lake Eden Arts Festival. Both shows were well received but due to non stop musical commitments for each of the Meters, Time would not permit them to continue the project until recently.

In 2012 the idea of once again playing as the Meter Men was revisited by Modeliste, Nocentelli and Porter, Jr., but this time around they wanted to include a special guest keyboardist. With five shows under their belts, four with Phish Keyboardist, Page McConnell and one with Galactic’s Keyboardist, Rich Vogel.

The Meter Men are off and running bringing thier unique brand of funk and exceptional musical styling to enthusiastic audiences across the country.