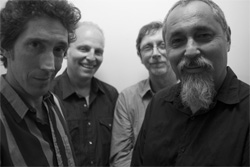 The word “Americana” gets tossed around rather loosely these days; it can mean anything from a hipster with a recently-discovered acoustic guitar to a decades-long denizen of the Grand Ole Opry. But when you set aside the Johnny-come-rootly types from the real deal, it’s a sure bet that you’re going to stray into Iguana territory. Based out of New Orleans for the past couple of decades – save for a short, Katrina-imposed exile in Austin – the Iguanas define a sound of Americana that crosses cultures, styles, eras… and even languages.
Their latest album, Sin to Sin, is their first studio recording since 2008’s If You Should Ever Fall on Hard Times, and its release coincides with their appearance at the New Orleans Jazz & Heritage Festival.

“The title for the new album,” says sax player/vocalist Joe Cabral, “comes from one of the tracks we cut during the sessions that didn’t make it onto the record.” At this point, the band’s guitarist and vocalist Rod Hodges picks up the trail. “It’s a line from a tune called ‘Blues for Juarez,'” he says, “that goes, ‘We rode the back roads from sin to sin. ‘”

The Iguanas’ two-decade road may not exactly have driven them from sin to sin, but it’s taken them all over the map, both figuratively and literally. While bassist Rene Coman is the only member of the band who is a native of the Crescent City, a languid swampiness so deeply suffuses their sound that you can almost smell the peanut shells on the floor. But there’s far more depth to it than the N’Awlins patina that rests, sometimes lightly, sometimes heavily, on anything the city touches. It’s almost as if the Iguanas dragged sand up from Juarez and mud from the Mississippi Delta, threw them both into the white-hot crucible of rock, and built their foundation from there, with drummer Doug Garrison anchoring their sound deep in the groove.

“Spanish was spoken around the house when I was growing up,” says Cabral, “but I was listening to all kinds of stuff: Herb Alpert, Boots Randolph, country music, rock, polkas… The area of south Omaha where I grew up was the classic American blue collar ethnic melting pot of Irish, Italians, Poles, Mexican-Americans, who all sort of brought these pieces into the mix.”

“How could we notwind up in New Orleans?” asks Rod Hodges, a little rhetorically. “I mean, at Tipitina’s they might have Doug Sahm one night and Fela Kuti the next.” And sure enough, even on their first album (The Iguanas, Margaritaville/MCA 1993), the band was comfortable planting Allen Toussaint’s oft-covered “Fortune Teller” cheek-by-jowl with cumbia master Celso Pina’s “Por Mi Camino (Along My Way),” leading Entertainment Weeklyto conclude, “never have accordions and saxophones been so much in love.” Peopleechoed that sentiment in their review of Nuevo Boogaloo(Margaritaville/MCA 1994), saying “any group that can turn on a dime from a gorgeous R&B ballad like “Somebody Help Me” to the steamy tropical funk of “La Tentacion” is clearly here to stay.

And stay they have, through half a dozen studio albums, countless tours and Jazz Fest appearances, and a flood that did its best to take their adopted city with it. It’s a testament to the band’s longevity and endurance that they’re still configured pretty much the way they were 20 years ago, while their onetime label, MCA, has gone the way of mousse-abused coiffures and Hammer pants.

Joe Cabral is pretty philosophical about the band’s persistence in the face of challenges that would have felled – indeed, havefelled – lesser bands. “First of all, this is all we know how to do; we’re musicians. But more than that,” he continues, “we respect the power of the band as an entity, and each individual in the band steps up to play his part. When it’s good, that’s really what it’s all about.

Rod Hodges agrees. “I don’t want to get all heady and mystical about this, but it’s not really an outward reward we’re looking for. We still all enjoy playing music, we all get along, and finding a group of people who can say that after all this time is a pretty rare thing.”