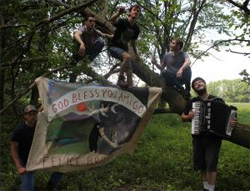 God Bless You, Amigo is a collection of home recordings made in the
spring of 2012. Due to a cloud of misfortune resembling in part the
curse of Rocky Colavito, our home was nearly destroyed by a freak
hurricane; our prized and seemingly immutable Winnebago was driven to
the ground and mercy shot somewhere in Vermont (long may she stalk the
golden highways of heaven); our singer and lead guitarist, Wall Street
Panic Snopes, was hospitalized for an acute skin disorder in a foreign
hospital; and then in what seemed a perfect finale, all of our amps
sizzled out and died during rehearsal upon his return.

This made us go insane with laughter and play our favorite song, “Gulf
Of Mexico” – which is also a known aid in exorcism – for what seemed
like hours. The old fiddle tune had a strange power over the band, but
our management convinced us that releasing a four-hour instrumental
was a little too reckless, even for us. After much deliberation we all
agreed that we should play more songs along with “Gulf of Mexico.” We
all spit in our hands and shook on it. This material consists of eight
traditional folk songs and 12 original songs that we’ve always liked,
but never had a chance to put on records.

The proceeds from God Bless You, Amigo will go towards a new tour
vehicle so that we can come and play your town, or enable us to go
into a studio and record a new album (as we have a lot of new
material), or to fix our amps. It’s only a $5 download, but you can
give more if you are feeling philanthropic.