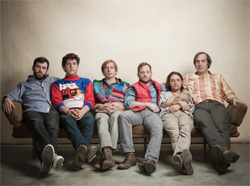 After a one-album sojourn away from their band-built recording studio Philadelphia’s Dr. Dog returned home to Meth Beach to self-produce their latest collection of gloriously ramshackle rock ‘n’ roll reveries. Out February 7, Be The Void (Dr. Dog’s second release on Anti-Records) showcases the critically adored band’s renewed commitment to cultivating a stripped-down live sound. “This record comes from our pushing toward a rawer, more powerful, somewhat jittery competence,” explains guitarist-vocalist Scott McMicken. “We drew a lot of inspiration from soul music and the Rolling Stones and the Velvet Underground—music that’s got its roots in live expression rather than that studio-perfected sort of vibe.”

While Be The Void bears the same style of scrappy yet hook-packed rock served up by Dr. Dog for more than a decade, the six-member outfit (McMicken, bassist-vocalist Toby Leaman, rhythm guitarist Frank McElroy, keyboardist Zach Miller, drummer Eric Slick and multi-instrumentalist Dimitri Manos) seems newly emboldened by its deepened devotion to a bare-bones aesthetic. A marked departure from the soaring pop of 2010’s Shame, Shame, the album also finds Dr. Dog revitalized by the recent addition of Slick (who’s previously played with Ween, Adrian Belew, and Project Object) and Manos (also a member of Arizona-based alt-country band Golden Boots).

Recorded in the summer of 2011, Be The Void seizes that vibrant spirit and transforms it into a 12-track song selection that’s at turns deadly catchy and dance-worthy (the shuffling swagger of “Big Girl”), wistful and bittersweet (the lovely, languid sigh of “Get Away”), and earthy-earnest (the twangy troubadour folk of “Turning the Century”). Though each track feels richly textured and intricately layered, the band made a conscious effort to keep the recording process fast and loose. “We worked quicker and trusted our gut more than ever before, and at times it was scary and almost panic-inducing,” says McMicken. “All of a sudden you’d be aware of a feeling like, ‘This is really working, so don’t mess it up.’ And then the song ends and your heart’s pounding and you realize you haven’t taken a breath in three minutes. It was like riding a rollercoaster and wishing you could get right back on again.” As a result of that newfound abandon and surrender to intuition, “there’s so much on the record that I could never have imagined us being able to come up with,” McMicken adds.

Perhaps the album’s most epic moment, “Warrior Man” makes for one of Be The Void’s most thrilling surprises. Both sprawling and beautifully bombastic, the track attacks with lead-heavy beats, pseudo-futuristic sound effects, and psychedelic back-up harmonies. “‘Warrior Man’ was born out of a joke—it started as some silly phrase that Toby was singing, then turned into a jam, and ultimately became this monster of a tune that was recorded live,” says McMicken. “Everything about its origin reflects that freedom and confidence to own a weird idea and just let it live.”

All throughout Be The Void, Dr. Dog delights in a playfulness that lends a refreshingly oddball feel even to the record’s more true-to-form tracks. “These Days,” for instance, backs its bouncy bassline with a dizzying swirl of sunny guitars, while the handclapping and hollering on the album-opening “Lonesome” help twist a downer of a refrain (“What does it take to be lonesome? Nothing at all”) into a sweetly anthemic stomper of a song.

At the same time, Dr. Dog’s rugged, rough-and-tumble disposition and razor-sharp wit preclude Be The Void from ever nearing mindless whimsy. Possibly the album’s most deceptively breezy offering, “That Old Black Hole” sets its sly lyrics (“Take this thorn from my side/Fix this chip on my shoulder/Time is racing with the clock/And I ain’t getting any older”) to a smoldering groove that turns frenetic and urgent in the song’s final seconds. By the same token, the disarmingly desperate “Do The Trick” pairs its woozy disco beat with a barrage of flirty wordplay that’s relentlessly clever (“I’ve burnt the candle on every side/I’ve long since run out of wick/Will you be my flame tonight?/Will you do the trick?”).

The first album recorded away from Meth Beach, Dr. Dog’s 2010 Anti- debut teamed up the band with Rob Schnapf (a producer who had previously worked with Elliott Smith, Beck, and Guided By Voices). Although that partnership yielded the much-acclaimed Shame, Shame, the band opted against bringing in an outside co-producer again for Be The Void. “We did try out a few songs with another producer, but we then we stepped back and asked ourselves, ‘Do we really need that?'” recalls McMicken. “Part of our growing aesthetic is to find the simplest approach that works best, and the decision to produce this one ourselves was sort of the first gesture toward recognizing our confidence in our experience and ability and sense of playfulness.” Indeed, that dedication to keeping it playful was key to shaping the sound on Be The Void, says Leaman. “Back when Scott and I first started making music together, there was a period of time when we just recorded and recorded constantly—just for our own pleasure, not even to try to get shows or anything,” he says. “Making this album felt like that again. It was like we were just putting a bunch of tunes together, just to have a good time.”