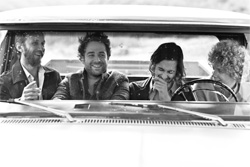 “The best rock ‘n’ roll is never preconceived,” says Dawes’ Taylor Goldsmith. “It’s almost a country mentality: ‘This is what we do. We write songs.’ That’s how it is for Dawes.”

A self-described “American rock ‘n’ roll band,” Dawes represent everything pure and true about that fundamental delineation, four talented friends making music together, fueled by a shared belief in the power of their songs. With Nothing Is Wrong, the Los Angeles-based band – singer/guitarist Goldsmith, his brother Griffin on drums, keyboardist Tay Strathairn, and bassist Wylie Gelber – continue to master their blend of singer/songwriter reflection with folk, country, and AOR-inspired arrangements, all ringing guitars, soaring harmonies, and heartfelt melodies. After spending much of the past two years on tour, songs like “Coming Back To A Man” and “Time Spent In Los Angeles” have a restless, unsettled quality evocative of life lived on the road. A collection of songs that expertly builds upon the template laid by 2009’s extraordinary debut, North Hills, Nothing Is Wrong sees Dawes displaying staggering growth and evolution while still manifesting their distinctive, unforgettable voice.

“We didn’t change up our approach too much and yet we were able to create something that I feel has a new identity from our first record,” Goldsmith says. “It’s definitely taking a step in a direction and at the same time, it’s maintaining what it needs to maintain.”

In 2009, Dawes emerged from the ashes of California combo Simon Dawes with North Hills, which drew instant acclaim for its rootsy revitalization of classic El Lay rock. And like any American rock ‘n’ roll band worth its salt, Dawes followed up by touring nearly non-stop. As a result, Goldsmith was only able to write during rare free moments, in the course of brief visits home or while crashing at a friend’s for a few days. No surprise then that songs like “My Way Back Home” and “How Far We’ve Come” (featuring Griffin on lead vocals) are redolent of van fumes and road dust, rich with weariness and longing and restive reflection.

“Both of these Dawes records have been written in a one-to-two year span of time,” Goldsmith says. “With North Hills, there was an ‘I just want to go somewhere and experience things’ quality. And then with this record, we’re in the thick of going out and playing shows and being on tour.”

Dawes took advantage of their situation by using the stage as a way to focus and arrange the new material. Songs got to live and breathe in front of an audience rather than in the hermetic confines of a rehearsal space.

Goldsmith took a brief break from the band to record with friends and tourmates John McCauley of Deer Tick and Matt Vasquez of Delta Spirit as the collaborative supergroup Middle Brother, and in September 2010, Dawes reunited with producer Jonathan Wilson at his new Echo Park studio. A gifted singer/songwriter/musician in his own right, Wilson has proven a true kindred spirit whose vision and tastes are in perfect sync with the band.

“We’re so lucky to know him,” Goldsmith says. “It’s really crazy how good he is at everything.”

As with North Hills, Dawes opted to record Nothing Is Wrong live to 2″ analog tape. Far from just an exercise in nostalgic authenticity, the band sees the more traditional technique as a way of focusing their energies and affirming their dedication to the creative process.

“If you’re writing on a typewriter,” Goldsmith says, “you have to commit to whatever you’re writing. Typewriters don’t make it easy for you to go back and rethink things. Same thing with recording analog. We don’t do it because that’s what the people we admire did. We do it because it demands something out of us. It doesn’t allow us to show up lazy or not on our game. We cut every track knowing that this stuff isn’t easy to edit.”

Nothing Is Wrong captures both Dawes’ studio and stage approaches, matching the loose extemporaneity and crunchy dynamism of the band’s live sets with finely honed arrangements and deft musicianship. The album evinces the band’s self-assured strength right from the start by bursting off the blocks with the impossibly infectious “Time Spent In Los Angeles.” Throughout the record, Goldsmith’s lyrics evoke a powerful feeling of constant movement and endless fleeting moments. Songs like “The Way You Laugh” or the choogling “If I Wanted Someone” are wistful and melancholic, while the ruminative, piano-driven closing track “Little Bit Of Everything” (featuring lap steel guitarist Ben Peeler) is peopled with indelible characters encountered on his travels.

Along with critical approbation and an ever-growing fan following, Dawes has earned admiration from many of their greatest heroes. Benmont Tench of The Heartbreakers joined the band on organ on bothNorth Hills and Nothing Is Wrong, while the new album’s “Fire Away” sees guest vocals from Jackson Browne, who has since invited the band to both support and back him on a European tour. In addition, after Goldsmith contributed vocals to Robbie Robertson’s star-studded new How To Become Clairvoyant, the legendary guitarist/songwriter asked Dawes to serve as his backing combo for a number of promotional performances, sensing in them the character of a true band, a tight knit unit who know how to work together and instinctively play off each other’s individual gifts.

“It’s hard to accept and believe,” Goldsmith says. “It doesn’t seem like it should possibly happen. Experiences like these are why we do it. Before playing in front of huge audiences and before selling a lot of records, before all those things that people are looking for when they decide to play music, for me, sharing these experiences with the people I grew up listening to, getting their acknowledgement or respect, that’s right at the top, the number one reason and the most rewarding thing that could happen.”

While Nothing Is Wrong marks a new milestone on this remarkable band’s musical journey, it remains but a single step on all involved see as a long-term trip. For Dawes, the aim is always about turning it up and taking their music even further.

“Our attitude is always, what can we do to take it to the next place?” Goldsmith says. “To share our music with more people, make better music, and be happier people through our music.”