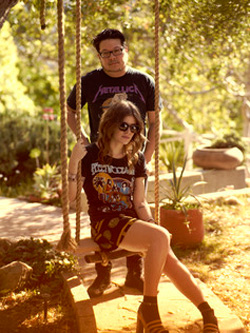 The Only Place is Best Coast’s follow-up to their 2010’s acclaimed album Crazy For You, and it finds the proudly Southern Californian duo of Bethany Cosentino and Bobb Bruno maturing in both their sound and perspective. While Crazy For You was a nostalgic tribute to teenage feelings, The Only Place finds front woman Cosentino starting a transition into adulthood. “I’m trying really hard to grow up,” she says. “I’m trying to let go of my bad habits and the immature things I still drag around with me.”

Of course this adjusting comes with uncertainty and self-doubt, two feelings at the emotional center of the album. The Only Place also celebrates Los Angeles, the one place where Cosentino believes she can be the woman she wants to be. Taken all together, it evocatively captures a turbulent era in one person’s life. “This record was therapeutic for me to write,” Cosentino says. “But a lot of the issues I was facing will be relatable to anybody.”

As with all of Best Coast’s previous recordings, on The Only Place Cosentino handles all songwriting, lyrics, vocals and rhythm guitar, while multi-instrumentalist Bobb Bruno plays lead guitar, bass and drums. What’s new this time is their decision to work with producer and composer Jon Brion. A revered figure in the music world, Brion has collaborated with artists including Fiona Apple and Kanye West and created the scores for such films as Eternal Sunshine of the Spotless Mind and Punch-Drunk Love. Recorded at Capitol Records’ famed Studio B, The Only Place features a cleaner and richer sound than other Best Coast releases. Many of the songs’ arrangements are detailed with subtle percussion and unexpected instrumentation. Intricate but never overworked, the biggest change from previous releases is how it showcases Cosentino’s voice, this time letting it ring clear, unhidden by distortion and reverb.

The Only Place is full of heartbreakers and kiss-offs. But the true heart of The Only Place, and everything that Best Coast does, is the collaboration between Cosentino and Bruno. For this album the pair continued to work with the system they developed during the band’s unassuming beginnings: Cosentino creates a rough demo of each song on her own with vocals and a basic guitar part, then sends it to Bruno who fleshes out the instrumentation and structure. The only time they work on the song together is when they are in the studio. Bruno is a music veteran and has recorded, producer and engineered with a wide variety of artists. “Best Coast is the easiest thing I’ve ever done musically,” he says. “We don’t really argue. I told Beth from day one, ‘If you ever don’t like something I’m doing or you want to change something, just tell me. I know it’s not personal. My feeling aren’t going to get hurt.’ Having established that before we even played a single note together, we’ve always had clear communication.” Cosentino adds, “This record would not have been anywhere near what it is without Bobb Bruno. I owe so much to him. I am so thankful have him in my life and having him turn these things I write in my bedroom into epic songs.”

Since the album’s release, Best Coast has toured concert halls and festival stages around the world, appeared on David Letterman, Jimmy Fallon, Conan O’Brien and the cover of Spin Magazine, featured in a Microsoft television commercial and in campaigns for Bushmills, Clarks and Rdio, created a fashion line for Urban Outfitters, dueted with Iggy Pop and Kendrick Lamar, had music featured on Girls and The New Girl, and will be opening the entire Green Day arena tour in 2013.