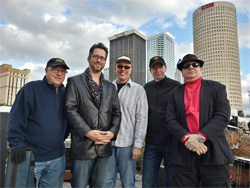 Jazz, blues, funk, rock, New Orleans R&B, fusion and jamband styles meet in the music of ACME JAZZ GARAGE, whose recordings have been heard on WMNF, 88.5 FM and WUSF, 89.7 FM.

ACME JAZZ GARAGE puts its own twist on Dr. Lonnie Smith’s “Norleans” and “Play It Back,” the Meters’ “Pungee” and “Look-a-Py-Py,” Paul Simon’s “One Trick Pony,” Herbie Hancock’s “Canteloupe Island,” Santana’s “Lightning,” and Beck’s “Loser,” along with tunes by Miles Davis, Jeff Beck and MMW, and originals in the same vein.

The band, regulars at Ella’s Americana Café in Seminole Heights, in 2012 played the WMNF Tropical Heatwave Festival (Ybor City) and the Child of the Sun Jazz Festival (Lakeland), and opened for national act Dave LaRue at Skipper’s Smokehouse in north Tampa. The year also brought performances at New World Brewery and the Italian Club (Ybor), Timpano (Hyde Park), Yeoman’s Road (Davis Islands), the Green Parrot (Carrollwood), and the Blue Parrot (St. Pete Beach). Ahead in 2013 are performances at the Gasparilla Festival of the Arts at Curtis Hixon Park, the Friday Extra Concert Series at Lowry Park, and Ella’s, among other concerts and club appearances.

TIM DIEHL (drums) toured the Southeast with show bands before landing a Disney World house gig with the Macar Brothers. He founded HeHThe Bank and Jazztek and was the house drummer for one of Tampa’s hottest nightclubs. The drummer for Hyde Park United Methodist Church since 2004, Tim is also a teacher and clinician. The USF graduate played with the jazz and symphonic bands, and the percussion ensemble.

MIKE ALOIA (keyboards), who played with Matt in the Juke Joint Kings, hails from the New York scene. There, he served hard time with The Hackensack Men & The Trenton Horns, laying down the funkified groove for the horn-driven 10-piece band. He also performed and recorded with bluesman Sam Taylor (former music director for the Apollo), Otis Redding, and the Isley Brothers.