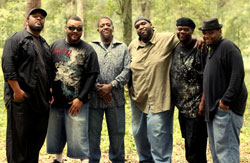 The Lee Boys are a funk and gospel band based out of Miami, Florida. The band plays in the Sacred Steel tradition that arose out of the musical stylings of the House of God Church. The band plays a mixture of funk music and gospel lyrics, staying true to their roots as a religious group. The band is similar in style to other House of God bands, such as Robert Randolph and the Family Band. This family group consists of three brothers, Alvin Lee (guitar), Derrick Lee and Keith Lee (vocals) along with their three nephews, Roosevelt Collier (pedal steel guitar), Alvin Cordy Jr. (7-string bass) and Earl Walker (drums). Each member began making music at the ages of 7 and 8 in the House of God church they attended in Perrine, FL. The Lee Boys are part of the fourth generation of musicians in this faith. These engaging artists work well in a variety of venues ranging from intimate club settings to performing arts centers to large festival stages. Their music attracts audiences from the jamband, folk, blues and Gospel worlds. They’ve performed throughout the United States, Canada and Europe and will continue influencing audiences worldwide with their “sacred steel”. In 2008-09 alone they performed for more than 250,000 music fans at festivals throughout the United States.