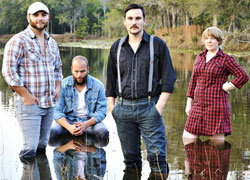 The Groves are a Tampa-based rock band born of close friendships and a dedication to forging a musical pathway all their own. Focused on building on the success of their debut album – March of 2011’s ‘In Season’ – the band has already crafted in excess of an album’s worth of new original songs that prove they are serious about delivering what is sure to be a breakout second album.

Capitalizing on the dramatic, resounding musical textures and deep lyrical content of their songs, The Groves polished, powerful live show engages their growing audience, raising their hands and belting out every word.

Find More information at:
www.thegrovesmusic.com
The Groves On Facebook