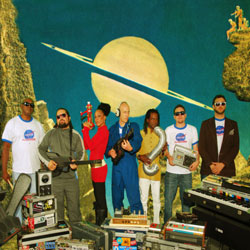 DJ Le Spam & Spam Allstars blend improvisational electronic elements and turntables with latin, funk, hip hop and dub to create what they call an electronic descarga. It’s not a known genre. It’s hard to describe. It attracts many types of people. But as they look out and see people dancing salsa, next to break-dancers, and festival-goers driving for hours to catch a show – they know something very special is going on.

Spam Allstars were formed by Andrew Yeomanson, a/k/a DJ Le Spam, who was raised in Toronto, Bogota and London, and has called Miami home since 1993. He got his start by playing guitar in Haitian band Lavalas, and recording and touring with Miami based artist Nil Lara. Along the way he added to his vinyl collection, and when off the road he would DJ locally. These DJ gigs evolved into collaborations with live musicians, performing on an internet radio show, recording in his home studio, and the first of many residencies combining his samplers & DJ skills with a live band.