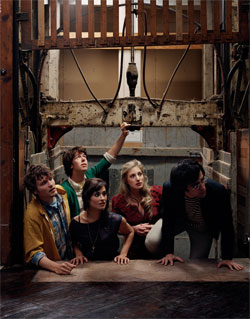 The Kansai region of Japan is considered to be Japan’s historical and cultural heart. It’s a region known for
Kobe beef, sake, and four of Japan’s most renowned national parks. Catherine Maxwell, an editor for the
newsletter Omusubi, once wrote that “Kansai residents are seen as being pragmatic, entrepreneurial, down-toearth
and possessing a strong sense of humour.” This also may explain why Kansai is seen as the home of
Japan counterculture.

On the surface, “Kansai” — the song that almost ends Ra Ra Riot’s latest album, The Orchard — does not
directly speak to this region. Instead we get mentions of San Diego, the optimistic notion of a merciful
universe, getting lost in fleeting thoughts, and what may be one of the album’s catchiest yet fussiest
arrangements: Weird shifts in time, unexpected strings, galloping Beach Boys basslines… It’s almost as if the
song is caught in a coastal divide of its own – a fidgety ode to the loose summer sun and the mystic climes of
upstate New York.

One would think the obvious place to start talking about Ra Ra Riot’s latest album, The Orchard, would be its
very first song, which also happens to be the title track, which also (indirectly, mind you) refers to the peach
orchard where the band took to writing songs for the album in the summer of 2009. None of that Kansai stuff
above is necessarily the intuitive place to begin describing this band. And that shouldn’t be a surprise: Ra Ra
Riot finds strength in subtlety and refraction. This is a band that cooks with indirect heat – melding taut
rhythms with lush chamber pop, subtle psychedelia, infectious melodies, and lyrics that tell the story of
timorous souls shaking free. Listen close and all of those R.E.M. comparisons finally make sense — just replace
the kudzu with a grove of peach trees. Kansai may be a place where ideas mingle, but The Orchard is where
they take shape and bloom.

The seeds of The Orchard were sown over the course of a couple of years, and harvested when guitarist Milo
Bonacci compiled every stray idea and demo the band had accumulated since releasing their breakthrough
album, The Rhumb Line. After assembling all those loose threads, the band took residence at the titular peach
orchard in Penn Yan, New York and embarked upon mammoth writing sessions punctuated by new adventures
in cooking, playing bocce, and simply enjoying the benefits of country living. (The orchard also marks the
beginning and end of an era: It was there, in the winter of 2005, that Bonacci, while housesitting during a break
from his architecture studies at Syracuse University, began writing songs and organizing the band’s activities
for the coming spring. Sadly, the house was sold not long after the writing of The Orchard was complete, and
the band had to abandon its hope of finishing the recording in Penn Yan.)

Fortunately, the time at the orchard was well spent: An invigorated and well-rehearsed Ra Ra Riot not only
conjured the sunny magic of their rural residency during a typically cold winter in upstate New York while
recording the bulk of the album, it was emboldened enough to add new voices to the mix. Now, in addition to
the stately coo of vocalist Wes Miles, The Orchard treats listeners to bassist Mathieu Santos’ instantlyhummable
“Massachusetts” and cellist Alexandra Lawn’s “You And I Know” – an album highlight that recalls
Tusk-era Fleetwood Mac. With their trusted soundman, Andrew Maury, co-producing the final recording
sessions, the group felt all the more comfortable in realizing The Orchard’s rich timbre. The final mixes by
Death Cab for Cutie’s Chris Walla and Vampire Weekend’s Rostam Batmanglij bring the album to full bloom.

The Orchard unfolds like origami – each undone corner revealing Ra Ra Riot’s collective knack for writing
sterling arrangements, addictive hooks and subtle details. Furthermore, The Orchard’s impeccable sequencing
and scant running time (the album runs just under the 40-minute mark) hits an aural sweet spot that will inspire
spinning this album over and over again, each listen revealing some new blossom, fruit, or lovely flying insect
that you hadn’t noticed before.