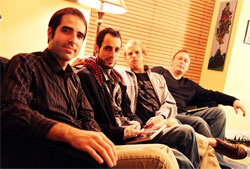 Coming together from the heart of Tampa bay, Florida is Infinite Groove Orchestra, a new breed of polished and versed uber-musicians who refuse to stay artistically still long enough for anyone to stick a label on them. Drawing from diverse stylistic influences and broad musical experiences, Infinite Groove Orchestra has the uncanny ability to infect anyone fortunate enough to pass within earshot of the foursome. Touching on everything from odd metered jazz formats to get out of your seat and dance elctronic drum and bass grooves to dirty, organ slammin’ psychedelic funk and feel good, push and pull reggae jams, Infinite Groove Orchestra maintains the perfect balance of respect for tradition with the keen understanding and practical application of modern technology.

Since the inception of the current lineup in 2007 consisting of Keyboardist John Richardson, Saxophonist Jeremy Powell, Bassist Jon Shea and Drummer Adam Volpe, the group has performed on the main stage at “Dali Fest” at the famed Salvador Dali Museum and opened for the legendary Sam Rivers. In addition, Infinite Groove Orchestra has also opened for and shared the bill with such acts as Galactic, Karl Denson’s Tiny Universe and Boombox and has been featured twice on WMNF 88.5’s live concert series. As Infinite groove Orchestra gears up for the February 2001 release of their first full length studio release “People Music”, one thing is for certain. Infinite groove orchestra is on a mission, to bring inspired, passionate instrumental music to the forefront and deliver high energy, mind numbing performances to audiences of all ages and musical tastes.