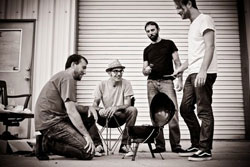 Have Gun will Travel is an alternative folk-rock band, launched on January 24, 2006. HGWT hails from Bradenton, Florida, and consists of band members Matt Burke (voice, guitar, harmonica), Daniel Burke (stand-up/electric base, voice), JP Beaubien (drums, percussion), Scott Anderson (electric and lap-steel guitar), and Joshua Hernandez (viola, mandolin). They are multiple “Best of the Bay”- winning Americana makers that have a natural instinct for combining folk, pop, rock and country influences to create a distincitve sound that is all their own. With the release of two albums the band began to tour extensively playing showcases at some of the major festivals and music conferences including South by Southwest in Austin, the Americana Music Festival in Nashville, the Atlantis Music Conference in Atlanta, and Orlando’s Anti-Pop Music Festival. Their latest album, “Mergers & Acquisitions”, released in November, is being considered the band’s best and most focused effort to date. The album appeals not only to fans of current Americana artists such as The Avett Brothers and Old Crow Medicine show, but also to fans of early Bob Dylan and John Prine.