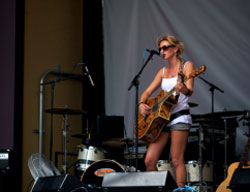 Amber Lynn is a fun, beachy singer-songwriter currently based in Saint Petersburg, FL. Her sound has been compared to the likes of Jimmy Buffet, Jack Johnson, and Sheryl Crow. The solo artist recently released her debut EP, “Beach Day,” which she produced and recorded in Nashville, TN and co-produced with Chip Hardy. She is highly involved in community events and fundraisers including Our Fallen Heroes, Miles for Hope, and Kites for Kids, to name a few.

Amber Lynn was born in New Jersey and grew up in a small town near the shore. She’s a natural performer and songwriter with amazing vocal talent and a skilled rhythm guitar player. Her musical taste was heavily influenced by her mother, Deirdre Rizzo. She learned the words to Bruce Springsteen’s “Thunder Road,” and the lyrics to every Jim Croce song on road trips to and from Florida with her family. Loggins & Messina, Paul Simon, Queen, Billy Joel, Elton John, Janis Joplin, Carole King, Carly Simon, James Taylor … hours on the road – and Amber Lynn new and loved every word.

She journaled and wrote poetry as a child, which developed into songwriting as she entered into her early teen years. She began teaching herself guitar at age 16.

Amber pursued a music degree in college. She worked many jobs and recalls that her college years were a wonderful but extremely stressful time in her life. She paid for most of her classes out of her own pocket. “My parents helped a bit when they could – but they couldn’t really afford my courses so I had to make things happen for myself,” says Amber. “I’m glad – because it taught it me not rely on anyone. It taught me how to be extremely independent and self-sufficient.”

Extremely self-sufficient and business minded she is. At age 25, she owns her own corporation, has released 6 singles to iTunes, has sold hundreds of copies of her EP since its release at the end of 2011, and is ready to hit the studio again to release a full-length album in August of 2012.