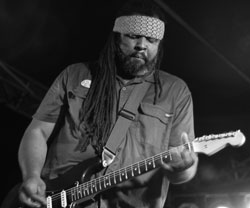 Alvin Youngblood Hart born March 2, 1963, in Oakland, CA is a Grammy Award-winnining American musician. Hart had family connections with Carroll County, Mississippi, and spent time there in his childhood. Thus influenced by the country blues, Hart is known as one of the world’s foremost practitioners of that genre. Hart is also known as a faithful torchbearer for the 1960s and 1970s guitar rock of his youth, as well as Western Swing and vintage country. Known as a musician’s musician, his praises have been sung by everyone from Bob Dylan to Brit guitar gods Eric Clapton & Mick Taylor. After receiving the 1997 W.C Handy Award for Best New Artist, as well as two Living Blues Awards, Hart’s 1998 release, TERRITORY, a rousing tribute to all forms of American music, received the Downbeat Magazine Critics Poll Award for Best Blues Album. In 2004 Mr. Hart received a Grammy for his contribution to BEAUTIFUL DREAMER :THE SONGS OF STEPHEN FOSTER. In the Summer of 2005 he released the self produced MOTIVATIONAL SPEAKER, a rock guitar free-for-all, paying homage to fallen & missing rockers like Phil Lynott and Sly Stone. The Summer of ’07 saw Alvin hit the big screen as a juke joint musician in the Denzel Washington directed film THE GREAT DEBATERS

Hart continues to tour the globe as a solo artist and with his Mighty Muscle Theory band.