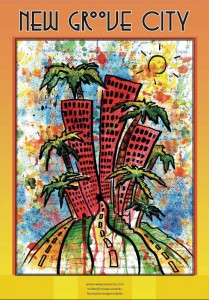 Gumbi Ortiz is known around the world for his exciting conga performance and his knowledge of rhythm and percussion. For the last 20 years Gumbi has been an integral part of superstar guitarist Al Di Meola’s band, he’s also a teacher, a session player and leader of Florida based “The Latino Projekt”. During the last 10 years, The Latino Projekt have grown from a revolving base of young musicians who’ve learned from and played with Gumbi, into a full blown band who record and perform hardcore timba and real Cuban salsa music. The band has released two successful albums, La Cura (2000) and Soy De Aqui (2005) and has toured throughout Florida and the Southeast. As the band continues to evolve and grow, so does the band’s sound. In 2011 The Latino Projekt officially became New Groove City to better reflect a more soulful direction the band has taken.